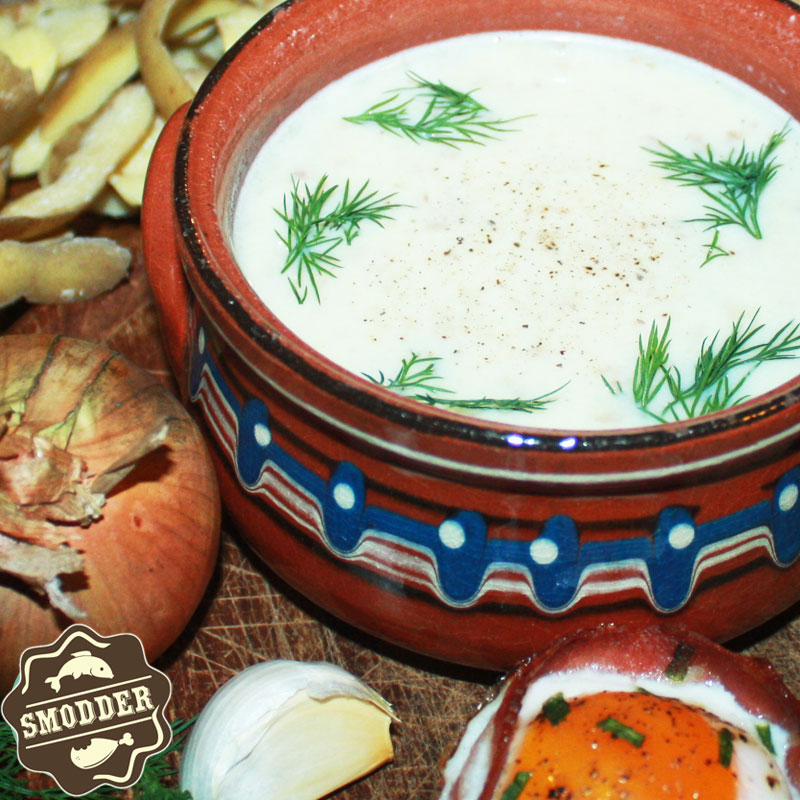 Potato peel soup is a soup that has been eaten in many countries that grow potatoes during a famine. This recipe is my grandmothers recipe; how she made it at the time around ww2. Sometimes she also added little pieces of meat, old bread, carrots or beets; what she could get hold off. She used fresh milk from her cows, and the herbs added ranged from parsley, dandylion, thyme, nettle, or what was available at the moment.

Luckely they lived near the Belgium border smugglerstrail during world war 2 and my grandfather participated in smuggling salt as an act of resistance (or just greedy made money out of the situation; there are different opinions on that subject); so they had access to salt. Because this bland soup needs it. Hence I deviated from the original recipe, that often had no stock or broth or watery stock/broth made with little meat and bones, and added regular modern day rich in flavour broth. If you want it exactly like during WW2; leave it out.

Potato peel soup is now a bit forgotten; what a shame! Potato peels are very nutritious and healthy! And it’s perfect if you want to reduce your waste, or want to increase the size of your wallet.

If you are as bad at peeling potatoes as I am; you are in luck! This recipe requires thick peels. *cough* I managed to get 200 grams of potato peels from 500 grams of potatoes for this recipes *shame* *blush* * cough* (please don’t tell my bomma she will disown me, thick potato peels make her mad after going through the war; if she finds out I’m telling people that they should peel thick for HER recipe she is gonna spank me with her carpet-beater)

Be sure to wash the potatoes thoroughly before peeling. Even if you bought them biological without pesticides used. Store the potato peels in the fridge if you need to.Store them in a wet cloth and no longer then 1 day.

With this potato peel soup I served egg and bacon muffins. You can find the recipe HERE. You can serve these egg bacon muffins IN the middle of the soup for a more festive effect! (Festive + WW2 famine soup…weird combo, sorry)