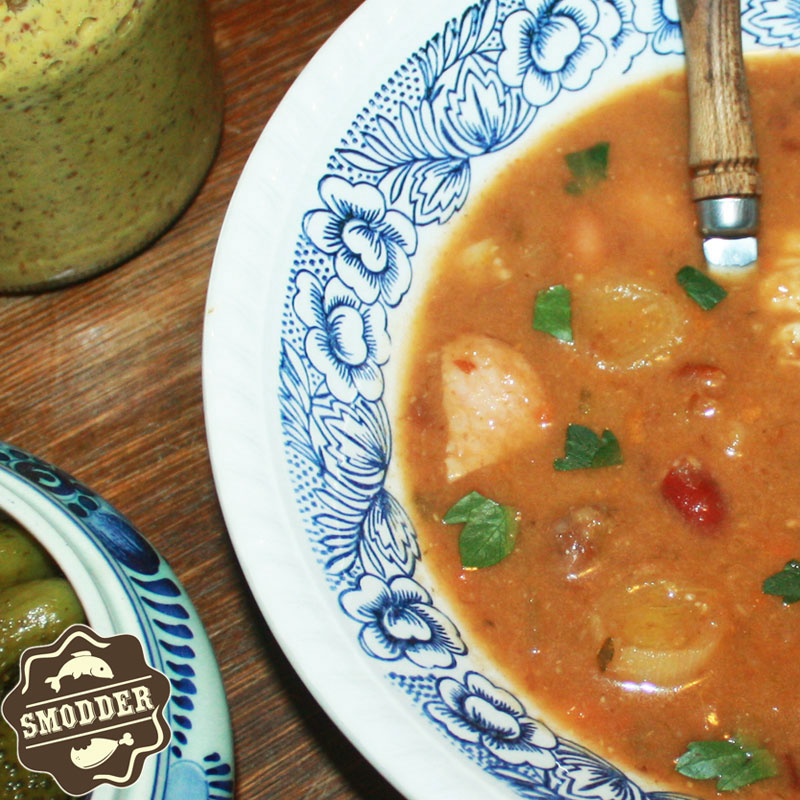 This classic Dutch brown bean soup has been around for SO long that every family has it’s own recipe.

Nowadays potatoes and bread are thé Dutch staple food; they are quite new though. In the 8th century cereals that produce grains for making bread ere brought to us by the Romans; but due to it’s hard and long proces to turn some grains in a loaf; it did not get a staple food for many; only the nobles. Around 1500 the first common bakers started to bake bread. This was cheap rye bread. Only the rich could afford bread made of wheat. Yeast was invented in the 19th century. Only after the industrialisation between 1850 and 1950 bread became a true staple food; even for the poor.

Spanish colonists brought the South-American potato to Europe in the 16th century. It took another century before the “common man” could add these potatoes to it’s diet.

So what DID all these common and poor folk in the Netherlands eat without potatoes and cereals as staple food? Beans, beans, beans, baby. Beans could be dried to survive the harsh winters. Some dried and/or smoked fish and meat, dried apples and berries, some late vegetables (mainly cabbages) and onions that would survive for a while in a dark dry cellar would be used to create a meal with the beans.

Slowly the Dutch kitchen changed; and in many families the Brown bean soup did too. The potatoes came; some added potatoes. The Dutch East India Company brought spices; some ended up in the soup. Indonesian migrants brought ketjap and sambal badjak; by many people in the Netherlands often added to this brown bean soup. But the basis stayed the same; Brown beans and smoked meat.

Allthough I love to throw in some curry-spices, ketjap and sambal badjak or oelek myself; this recipe is based on the recipe from my grandmother when she was 20. That she herself with time had changed a bit when certain spices became popular during her life; ready-to-go broth in powder form became a thing, and easy and cheap processed smoked beef sausages replaced other home salted/smoked pork meats, dried beans became tinned beans. I adapted it again in the time where I am living; added some worcestersauce and… the blender lol.

On the smoked beef sausage; “Rookworst” it’s called in Dutch and is REALLY popular. You can find it in almost ALL classic Dutch cuisine; where it has replaced the smoked porkmeats that used to be in it. You might not be able to find that sausage where you live. Other (not dried!) smoked beef or pork sausages will do. The sausage is added for the smoked flavour. If you can not find a non-dried smoked sausage; you can replace it with other non-dried smoked meat. I guess you could switch; instead of unsalted and not-smoked porkbelly slices you could use thick bacon slices/smoked porkbelly pieces and add a non-smoked fresh sausage. If you do; please let me know how the soup was!

On to the beans! For this soup a brown bean is used called the “Dutch brown bean”. In English it is often called the “Swedish brown bean”. If you can’t find those; pinto beans, kidneybeans, cranberry beans, appaloosa beans, flafeolet and black beans will work too. It will become less brown though.

For looks and taste I often add some extra mixed beans, out of a tin or from the garden, and keep them whole. For example white beans and beans like mentioned in the paragraph above.

You can make this soup from dried beans. People used to make it from dried beans before canned goods became cheap. Wash the beans and soak them 24 hours in cold water, twice as much water then beans, before cooking.