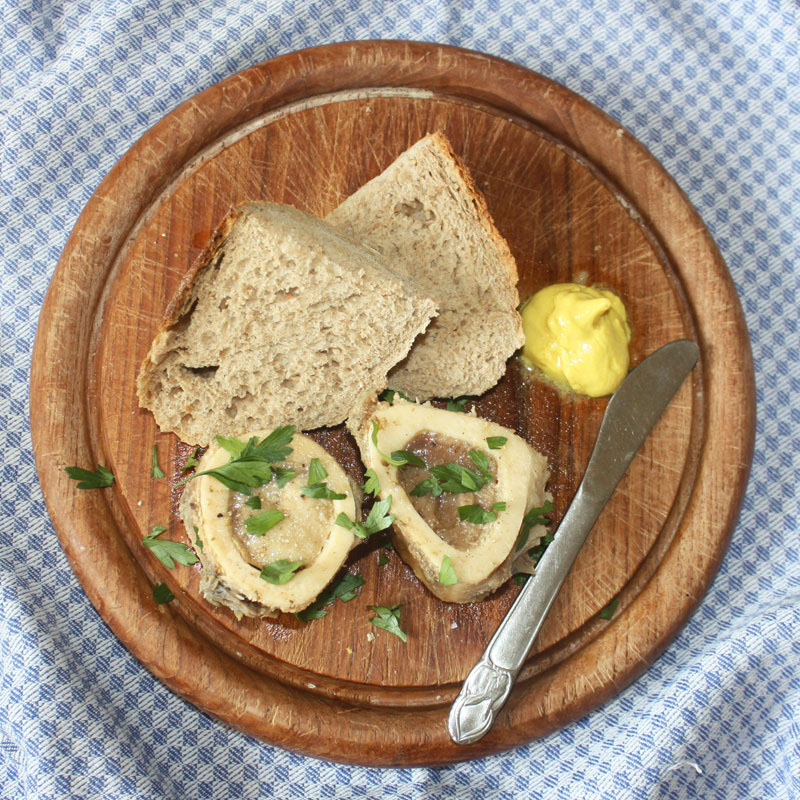 Bone marrow is believed to have been eaten since prehistory. It was a popular snack in the middle ages. In the 17th and 18th century it was so pupular they even made a special utensil for it; the marrow spoon. Long and thin to scoop every inch of marrow out of the bone.

Marrow contains a lot of healthy iron, phosphorus and vitamine A and 500 calories per 100gr/3.5 oz.

Marrow bones are incredibly cheap too! Especially if you eat them with bread; and use thewater it cooked in to make a soup with leftover vegetables, potatoes/rice/pasta; you have 2 meals. Here are some ideas for old and traditional soups.

Where I live smaller pieces of bone are for sale in every supermarket. In the middle ages and 17th and 18th century they often used longer pieces of bone (hence the long marrow spoon), and sometimes they split them in two in the length when they were very long.

There are 3 ways to prepare bone marrow:

Cooked quick: 3-5 minutes in boiling water. You can use the left-over water for soups and sauces. You can put salt on the marrow before cooking to prevent it frombeing cooked out of the bone.

Baked in the oven. Preheat the oven to 200C/400F. Put the marrow on a greased oventray or sheet. Let it bake in the oven for 10-20 minutes; depending on how big they are. Turn half way if you do no have cut them length wise. If the bone marrow became see-trough it’s done. Sometimes parts can be thicker and become white; as you can see on my left bone marrow. That means it is done too.

You can also put the bones in tinfoil and put them om the BBQ. I can’t give the baking time though; you have to check yourself now and then if they are ready.

Other serving options include a little bit of lemon or a parsley-salad with ot without radishes.

Totally a fan now of bone marrow? This book from Jennifer McLagan, Bones: Recipes, history and lore, has a recipe with a nice parsley salad, and many more recipes what to do with everything that involves bones. Some interesting history is provided too.

Where did you get that?

The plate is an handmade wooden plate available at Amazon.

The table cloth is just a checkered dish towel from good will.